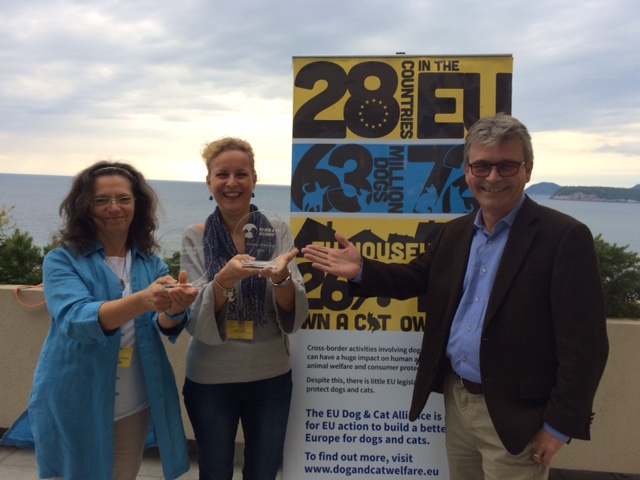 The EU Dog & Cat Alliance, which encompasses almost 65 organisations from over 20 Member States, yesterday recognised those organisations which make the largest contribution to making the mission of the Alliance - safeguarding the welfare of dogs and cats across the European Union - a reality. The awards were introduced at the annual International Companion Animal Welfare Conference (ICAWC) where the Alliance marked its second anniversary at their Annual General Meeting. The winners were honoured through two new awards: Alliance Member of the Year and an Award of Merit.

The Alliance Member of the Year award recognises the most active member who has regularly contributed to Alliance initiatives through regularly attending meetings and adding to new research, briefings and campaigns whilst remaining prolific on social media. The award was presented to Save the Dogs, an organisation active in Italy and Romania led by Sara Turetta, whose projects include working tirelessly to prevent the suffering of Romania’s many street dogs.

The Award of Merit is awarded to an organisation which has displayed the same active spirit whilst acting in the confines of their more limited resources to contribute to the work of the Alliance. Polish based Towarzystwo Opieki nad Zwierzętami w Polsce (TOZ), led by Danuta Mikusz-Oslislo, were the worthy recipients of this award. TOZ joined the EU Dog & Cat Alliance only this year but their contribution through attending meetings and events and contributing to Alliance activities has already been invaluable.

“We are delighted to be able to recognise the invaluable contribution both organisations have shown in supporting the vital work of the EU Dog & Cat Alliance, through our pioneering new awards. The awards ceremony will now become an annual fixture at our Annual General Meeting. We are extremely grateful for the support of all our Alliance members, and we hope the awards will encourage other members to take an even more active part in Alliance activities. The deserving winners will both receive monetary awards which will go towards helping them continue with their incredible efforts to improve and protect companion animal welfare in the European Union.”